The civic league welcomed the city of Virginia Beach traffic department to the meeting on February 4th. They presented the results of their study and their suggestions for improving traffic in Fairfield. See their presentation below as well as the annotated version from the head of the traffic committee, Doug McLiverty.

The city’s Traffic Engineering department has very recently finished with a three part study to evaluate the effectiveness of the new speed tables along Lord Dunmore Dr. (LDD). Once complete, we should have a plethora of new information, including car counts and average speeds, that will provide insight into the effect of the speed tables and also quantify the current traffic along LDD. Even more interesting to the FCL Traffic Committee is the Origin/Destination study that was done in January. We are also waiting for the city to share the results of this study. Hopefully it will give us a very clear picture of local vs cut-through traffic along LDD. We are anxious to finally have some definite numbers to share and consider.

You may have seen the work crews on Oakmears Crescent recently. They have installed concrete bases for the auxiliary traffic lights that are being added to that intersection. The short explanation is this: Cars leaving LDD to turn onto Princess Anne Rd will have a new traffic signal in place of the yield sign that is there now. Cars leaving the 525 apartments will also have a new traffic signal that stops them before they pass LDD. When the main traffic signal is green (giving the right of way to Oakmears Crescent), those auxiliary lights will first allow the cars on LDD to proceed and then the cars coming from the apartments in turn (or perhaps the reverse order).

There is one new traffic statistic that the city has shared with us and we want to share it with you. This past December, the average number of cars per day on LDD between Vestry and Oakmears was 5,621. While we have seen numbers reach that high in the south end of LDD, this number shows a sharp increase in traffic at the north end of the road. It is a 13% increase from numbers taken just 6 months earlier, and a whopping 54% increase from numbers of 4 years ago. While traffic in our neighborhood is nothing new, these numbers show us that the problem is continually changing, and in this case, worsening.

As discussed in the Civic League meeting, above is the amended version of the petition that we are proposing to the City of VB Traffic Department. We are asking them to approve this version in place of the very uninformative and unhelpful version that they first sent to us.

Below is the petition map that our Traffic Committee is asking the City of VB Traffic Department to consider using for the trial closure. We are asking that the petition be limited to the homes along the green line. Our goal was to include the homes most affected by the closure by considering a) whether they will be losing their closest entrance/exit to the neighborhood, and/or b) whether the anticipated changes in traffic will affect the road in front of their house (whether the change is for better or for worse). 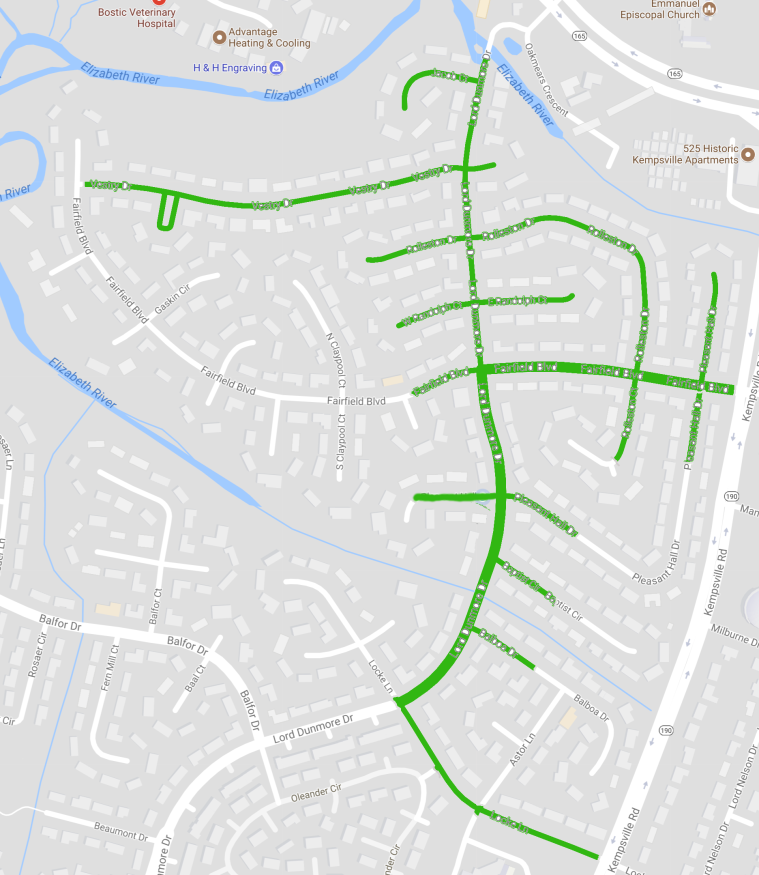 ✉ If there is a problem with the webpage, please feel free to use the Contact Us form or email the webmaster directly at webmasterfairfieldcivicleague@gmail.com